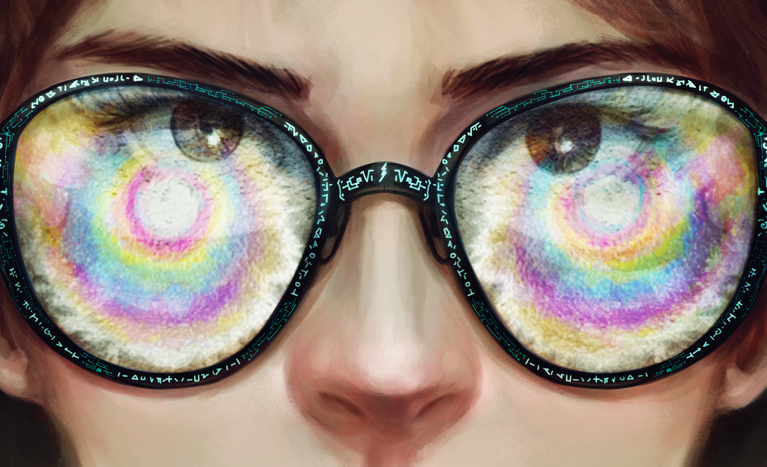 If you’ve seen my graphic novel, Frankie Ravens, you might be wondering where I came up with those ideas?

Let’s see… It all started back when I was seven years old, a lonely summer day when my brother and I were working hard to win my father’s “Weird Character Contest”

I wouldn’t remember much of it now, but he keeps a file cabinet with all my contest entries. Yup, during that long ago summer, I’d sit down for hours at my desk, struggling to create new, innovative characters like Frankie Ravens.

(Actually, I probably struggled to hold the pencil back then!)

In that old metal cabinet, I can find hundreds of my daily cartoons, some of my contest entries, and also a few 1-page stories I wrote to win a “Story Contest.” Those stories feature dogs and cats and spider villains. lol.

This might actually be the very first picture of Frankie Ravens: 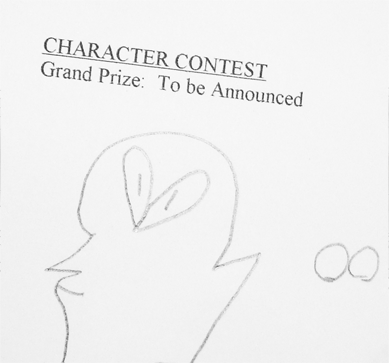 As you can see, she’s come a long way from the drawing board… and yes, I did fix her eyes. I made them rounder right away; over on the right side you can see the first revisions. She’s also got a little more hair now.

Notice the Grand Prize of the Weird Character Contest was “To Be Announced” – I don’t recall what those prizes were (ice cream? a trip to the park?), but did I ever want to win! The intrigue, the mystery, the excitement! 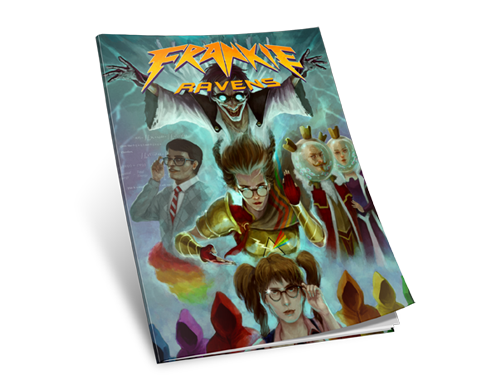 So it’s true: things don’t happen overnight. Not only did I fix her eyes but I gave her magic glasses, among other things.

Frankie became a Superhero and launched her own comic strip. The series is delivered in episodes, and the individual proof copies are available for sale online. The Frankie Ravens series is unique because I tell the stories with graphics, music videos, story puzzles and live stream performances by a real character featured in the book.

Gub Librarian (one of my Twitch.tv stream characters) is Frankie’s alter-ego and she reads from each book when it is launched.

I don’t know that any other artist in the world is doing anything like this: each episode includes a music video and the lyrics give a different perspective of the story.

I actually had my own cartoon strip when I was growing up, called “Pretina”: 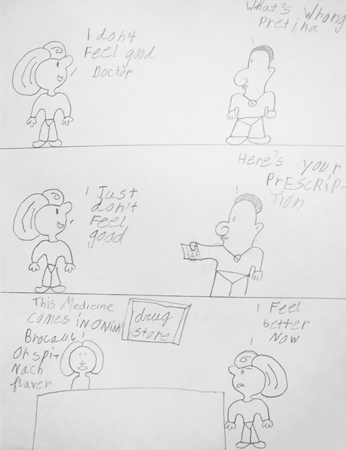 This is one of my daily cartoons, created at seven years of age, and if you follow my Twitch stream now, you might notice the topic in this cartoon resembles my beanboozle script, a popular feature on my stream where I eat horrible tasting jelly beans (Chat loves goofing around with this type of stuff).

Pretina was my very first cartoon strip, and I always wanted to have a real one, so now I do. Pretina had a whole cast of friends, and I probably got a lot of my stream ideas from her. Some of my current characters just may have started with Pretina and her crew. The stories are different now, but that may be where it all started.