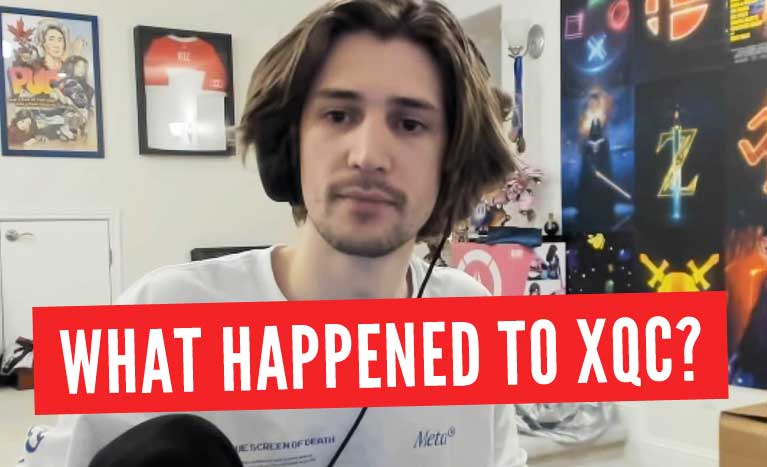 Streaming is a real “job” that consumes time. Stay too long away, and you might damage your channel beyond repair—the stream may never recover. The internet seems like a conscious entity, a ravenous beast thirsting for the next “it” thing, and if you’re not present at the camera to be that “it,” the beast moves on, looking for something else.

Because of this persistent demand, the more popular streamers seldom take long breaks from the camera. They stay visible, grinding away the day on their streaming platforms while thousands upon thousands of viewers consume their content. Because of this, it caught my attention when a top Twitch streamer, xQc, took an unannounced departure from the camera.

I’m always curious about such things. Oftentimes, the reason turns out to be extenuating circumstances: a sick family member, mental health, or maybe they took a more traditional job. Many streamers disappear suddenly; they fade into the abyss, never to be seen or heard from again. It seems easier for large streamers like xQc to take breaks because their audience is massive, unlike smaller streamers with a more fragile following. In any case, breaks are detrimental; the monetary impact can be large or small. Rumors always float to the surface: the dark crusty goo of the streaming realm—swatting and break-ins by mentally unstable viewers.

xQc didn’t say much about his disappearance, until he broke the silence with a tweet on July 12th, and then followed up with a live stream July 14th to explain his situation. His tweet said:

“EVERYTHING IS IN DISARAY, I CAN GO LIVE BUT I DON’T WANT TO STREAM UNTIL I CAN MAKE “GOOD” STREAMS AGAIN. GONNA NEED A LITTLE MORE TIME. UNPREDICTABLES KEEP STACKING UP. SORRY”

On the stream two days later, he gave few details. He appeared to be streaming from a kitchen table, battling bright light seeping in from windows behind him. Incorrect lighting can cause the camera to repeatedly focus, so I understood his annoyance when he stood up to adjust the blinds.

The tweet said he didn’t want to stream again until he could make “good” streams. The pressure to make a “good” stream is mentally draining and a task to reckon with. Now he was battling the lighting and apparently streaming from a kitchen chair, which looked uncomfortable. Streamers feel pressured to present an optimal performance with a perfect setup, and they can feel like a failure if they don’t deliver—I get it.

He also mentioned “unpredictables stacking up.” You might be wondering what unpredictable events happen in a person’s life who games most of the day. Well, the glamorous life of streaming is sadly cluttered with dark corners of “unpredictables.” He discussed these unforeseen events that day: repeated swatting, a home break-in, and other “weird shit.”

Apparently, at his “main house,” swatting occurred often, but the situation was manageable. It became unmanageable when a burglar broke in with a crowbar looking for him and yelling that he “owed him.” xQc checked his DMs and didn’t see anyone had wrote him saying they were owed something, and he appeared puzzled by the demand.

After these incidents, he moved in with another famous streamer “SodaPoppin,” hoping to calm the situation, but after the transition, police were constantly appearing there. He felt he was being “unfair putting people around him in danger,” referring to Soda and his dogs, so he decided to move again. He even mentioned he might just sell his house and move on to something else.

Can we all take a moment to ponder how sick and distorted it is when a streamer is forced to pick up their entire life because a deranged person is harassing them?

Listening to these troubling events, I felt sick to my stomach. Obviously, the dangerous situations required him to consider safety. On top of that, he felt the need to keep up with his large fan base by continually producing content. How the heck does anyone manage this?

Many people don’t understand what he means when he says it’s “unfair putting people around him in danger” that he and others are literally in danger. But consider this scenario: The cops arrive on the scene, most likely after a 911 call reporting a hostage situation at his house. The swat team rolls up with cocked ARs, screeching tires and yelling, prepared for violence…

A pound at the door.

“Put your hands on your head! Get on the ground! Now!”

Make a move and you’re blasted into oblivion. Once they search the place, calm down and give you a chance to speak, they learn it was a prank—another swat to feed the beast, just more fodder content for the camera.

A few years ago, someone was accidentally shot and killed in such a swat. The person behind the prank got charged for a crime, but how can you ever pay for a lost life?

After xQc’s initial swat, the cops were less responsive to calls at his address, but by law they must investigate every single call. It would be annoying to have the police stopping by every day, like xQc said was happening to him. By notifying them ahead of time of where you live, what you do, and informing them about potential swatting, you can partially prepare them for pranks at your address.

xQc said that all of this was draining the fun from streaming. I understand that. People think streaming is all fun and games; they never see the darker side. xQc’s break from streaming shined a light on the dingy corners of the streaming realm, and now hopefully people can understand how serious these situations are. Streamers don’t have to be like a monkey in a zoo—locked up to entertain the masses, who continuously throw popcorn into the cage.